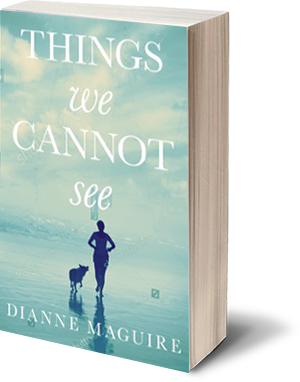 Set on the magical coast of the Fleurieu Peninsula and inspired by true events, Things We Cannot See is Dianne Maguire’s second domestic suspense novel – a compelling story of children and families, love and betrayal.

Laura Nesci has found her forever partner – until he leaves her for no apparent reason. It is only in the wake of a family tragedy and the unearthing of her husband’s secret life that things fall into place, including Laura’s burgeoning attraction for local artist Flynn. Fighting against the temptation of another possibly disastrous relationship, Laura channels her energies into her work as a victim support officer with the police.

Fifteen-year-old Alex is a girl with secrets. Her best friend Maddi believes it’s wrong, but Alex knows that what she has with their science teacher is special. When Alex is attacked, Maddi and Laura become locked in a silent battle of wills: Laura suspects that Maddi is keeping secrets for her friend, and Maddi must decide whether to speak up or remain silent.

But the final telling of Alex’s deepest secret is met with shock and disbelief from everyone, including Laura, who thinks she has seen it all – until now.

What Reviewers are saying...

Back to Books Page