…Even this prickly hank of wool on my neighbour’s lawn.

It seems harmless enough, but this tangle of yarn promised a young magpie she’d be crippled for life.

I know this because our beach shack is in the magpie’s territory.  I see her several times each day and have become obsessed, nagging so many experts on how to rid her of the wool binding her legs, probably acquired in the nest. ‘Magpies are far too smart to be caught…’ they told me ‘… but gain her trust and you may get the chance to cut her free.’

It took only two days before she was eating from my hand. I would tell her, with scissors poised, how I could break the strand binding her feet together and she would listen, her head on one side. (Magpies actually have eyelashes. Did you know that?) …But the second the scissors moved towards her she would flap away with an indignant squawk. When I approached with a net or towel, she’d stay at a safe distance with a look that said, ‘Really?’ 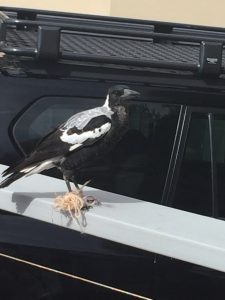 One morning she swept in and ran along the deck’s railing toward me. The strand linking her feet had snapped. I was overjoyed. But she was indifferent – of course she was, she’s a bird!

Her feet were no longer hobbled but the wooly cuffs still clung to her and caused her to limp, to occasionally lift her foot in a cramped curl.

The yarn my neighbour found this week was discoloured but we knew where it had come from. Thrilled, I called the magpie from our deck, smiling to myself as the spot in the sky grew closer and she landed with a squawk at my elbow. I wish I could tell you the wool no longer binds her, but that isn’t the case. The good news is there is less of it now and this discarded piece is proof positive she is finally picking it away.

Soon I’ll return to the beach and I’ll see her again. This time I’m certain she will be just like the others – well, apart from her bossy squawk.

Leave a Reply to Leanne